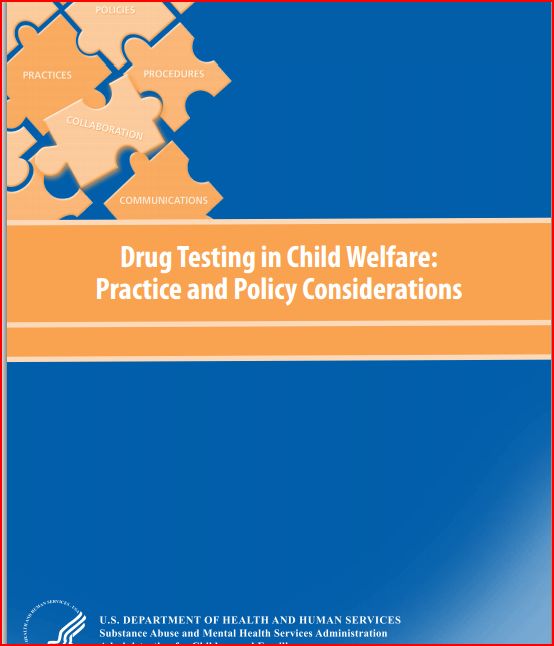 According to this NO! But almost all county social service “child protection” agencies across the country and abroad DO REMOVE CHILDREN BASED ON ONE TEST ALONE. Is it LEGAL? The answer is NO IT IS NOT “LEGAL”. Nowhere in the California Welfare & Institutions Codes does it state that they have authority to take possession of a child based on ONE drug test. Often, CPS will remove your child simply for declining to cooperate, if it comes back “diluted” which only means that there was not enough creatiine in your urine so the test was aborted. So, if a person drinks the recommended 8-10  eight ounce glasses of water a day and goes to test before they have eaten and/or digested any portion of food then most likely the test will be considered a “dilute”. That will prompt CPS to suggest and ultimately state as a fact, that you used and purposely drank an exessive amount of water to “fool” the test. What a bunch of bullcrap that is, especially when you do not know these things before hand! I know, I experienced it.

A MOUTH SWAB TEST SHOULD NEVER BE USED TO REMOVE YOUR CHILD BECAUSE THESE TESTS ARE INITIAL TESTS AND THEIR PURPOSE IS TO SAVE MONEY ON LABORATORY TESTS AS THEY CAN QUICKLY SHOW THAT THE SUBJECT DOES NOT HAVE ANY DRUGS DETECTABLE IN THEIR SYSTEM. This includes any “on-the-spot” or “on location” tests such as a “dip stick”. A positive test is NEVER positive until confirmed by a scientifically calibrated testing machine in a certified laboratory. BUT DOES ANYONE IN CHILD PROTECTION OR THE JUVENILE DEPENDENCY COURT EVER ACKNOWLEDGE THESE BASIC DRUG TESTING PRINCIPLES AND REGULATIONS? NO THEY DO NOT. Want to know WHY? Because the “lawyers” for the parents and children DO NOT OBJECT, DO NOT CHALLENGE AND DO NOT CARE about children and families.

TO THE DEFENSE PANEL LAME-O ATTORNEYS: STAND UP FOR WHAT KNOW IS RIGHT, NOT WHAT YOUR HAVE “BOUGHT-IN” TO! DO YOU KNOW WHAT YOU REALLY ARE, NOT DOING THE RIGHT THING?  YOU ARE NOTHING BUT A BUNCH OF LAZY SOCIOPATHIC SADISTIC SORCERERS SEIZING YOUNGSTERS FOR SELFISH SECURITY

Often social workers will use mouth swab preliminary drug test kits and they are told to use them as evidence to remove children. They KNOW that they can and will get away with it because they KNOW the parent’s lawyers will NOT object to their use nor will they challenge ANY DRUG TEST WHATSOEVER.

In our second case, I declined to participate in their drug testing as they faked the results more often than not. Twice they tried to “prove” to me that they do not fake tests and came up with two negative hair follicle tests but it is so obvious how they cut-and-pasted the real test document onto their THIRD PARTY COHORT (CDT iNC.) LETTERHEAD like they do for the fake ones. Near the end of our first CPS case, I did not even show up at the collection site to give a hair sample and they still came up with a positive hair follicle test! You can tell how fake this test is by the fact that it does not claim to be positive for amphetamines. It is IMPOSSIBLE for hair to be positive for only methamphetamines because when you consume methamphetamines, it quickly converts to amphetamine metabolites as that is the main ingredient of methamphetamines. Can’t make meth without  ephedrine which is what? An amphetamine! Many clinical and case studies have been conducted on this issue and the research documentation available online. If the “lawyers” were actually on your side, they would contest, object and motion to dismiss based on the falsification of documents that CPS social workers commonly submit to the COURT. That, in and of itself, is a FELONY in California!

Offering or preparing false evidence under Penal Code 132 PC or Penal Code 134 PC is a California felony.4 This means that it is possible to be sentenced to as much as three (3) years in California state prison if you are convicted.5

1. Definition and Elements of the Crime

Filing a False Document under California Penal Code Section 115 PC makes it a felony to file any forged or false document with a public office.

The statute requires a prosecutor to prove the following elements:

The term “document” has been interpreted broadly by courts and prosecutors. The statute is most frequently used to prosecute the filing of false property deeds in connection with real estate fraud schemes. However, Filing a False Document charges can involve almost any document that can be legally filed in a public office, including bail bonds, probation work referrals, and even fishing records.

Looking to make some quick money, a man forges a copy of a property transfer deed indicating that he purchased a home from his mother and he is now the lawful owner. The man files this forged property deed with the county recorder’s office and then takes out substantial loans against the property. Not only is the man guilty of mortgage fraud, he would also be criminally liable for Filing a False or Forged Document and could be prosecuted for both offenses.

Filing a False Document under Penal Code Section 115 PC is usually associated with other Theft Crimes andWhite Collar Crimes such as Real Estate Fraud and Mortgage Fraud. In fact, prosecutors may prefer to file charges under Penal Code 115 PC because it is a felony level offense that is easier to prove than some of the more complex fraud charges.

HERE IS ONE OF EIGHT FALSIFIED “DRUG TEST” DOCUMENTS THE DEPARTMENT CLAIMED WERE RESULTS OF HAIR FOLLICLE TESTS:

To learn what happened to us, see "Our Story" page, the link is at the top of this page.

From Our Fellow Advocates

Tips About Dealing With CPS

If you know for a fact (you have personally seen it, heard it or the child has told you) that a child is being abused, neglected (to the point of inhumanity), molested, sexually exploited, being battered, beaten, tortured,, starved, locked in closets, burned with cigarettes, or a very young child (5 and under) is being left alone for any amount of time, etc. CALL THE POLICE! NOT CPS! Child "Protective" Services is NOT IN THE BEST INTERESTS OF THE CHILD. FOSTER CARE IS A DANGEROUS PLACE AND FAR FAR TOO MANY CHILDREN BEAR EXTRAORDINARY CONDITIONS IN FOSTER CARE. HURTING A CHILD IS JUST WRONG AND HAS LASTING AFFECTS ON THE REST OF THEIR LIVES. SOME PEOPLE JUST DON'T CARE. OTHERS CARE MORE ABOUT CHILDREN THAN THEY DO THEIR OWN LIVES. HOW CAN PEOPLE BE SO DIFFERENT? WHY DO PEOPLE HAVE TO BE SO EVIL?

Past Articles By Month